Recommended Reads: The Mask of Dimitrios by Eric Ambler

Described by Diamond Crime author, Jeff Dowson as ‘the best book wot I read’, “The Mask of Demetrios”    is by by Eric Ambler. 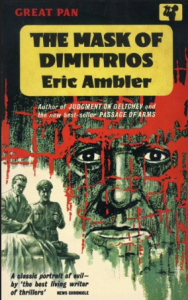 “I can remember at 11 years old, watching a screening of “The Cruel Sea” on BBC Television. I saw a name on the opening credits – Screenplay by Eric Ambler and asked my dad who he was. He pointed to the bottom corner of a bookcase. “There’s a book there called The Mask Of Demetrios. Probably the best you’ll ever read”.

It was the book which made me want to be a writer. To this day, I still regard it as one of the greatest thrillers ever written. In that respect I’m in the exalted company of Robert Harris, Graham Greene and John le Carré.

Written in 1939 on the eve of war, set in the Balkans, this is the work of a writer at the height of his powers. And it still feels as though it was written yesterday. The hero Charles Latimer is a journalist travelling in Turkey, where he stumbles over a story too good to let go. It features Balkan drug dealers, unscrupulous European businessmen, and bedraggled refugees struggling across Europe.

The action takes place on back roads, in trains, cheap hotels, and sleazy bars, and throughout, Ambler doesn’t miss a beat.”