Recommended Reads: Out by Natsuo Kirino 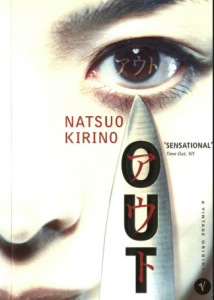 Natsuo Kirino is a Japanese author of dark tales featuring ordinary people in extraordinary circumstances.
Her most famous novel, Out was published in 1997 but it wasn’t until 2004 that it got its first English translation by Stephen Snyder so I could enjoy this gripping read.
I was immediately pulled into the bleak monochrome world of the female factory workers who make up the main cast. Four very different characters, they all share the common thread of a miserable existence. Some men in Japan weren’t so keen on the storyline, with one TV show host suggesting the author was encouraging women to murder their husbands and telling her she should stick to writing romance instead. A stupid thing to say to a crime writer who knows how to get rid of bodies.
Out by Natsuo Kirino brings crime to one of it’s most unusual settings – a factory where they make traditional Japanese meals in a box for one called Bento. Four women who are more workmates than friends, decide to join forces and help when one of them accidentally kills their gambler husband. Helping in this case means disposing of the body.
They say that the path to hell is paved with good intentions and that’s certainly true of this spellbinding novel that grabs you by the throat and won’t let you go until the very end. The main character stays with you because in Masako, who finds she has a gift for body disposal, Kirino has crafted one of the best female characters I have ever read.
Set against the dark backdrop of a society where the women featured live in the shadow of the men in their lives, Out makes you yearn to learn Japanese so you can read the book without needing any translation.