My preferred choice of crime fiction involves an intricate psychological exploration of why a crime came to happen and what its ramifications were. So I wouldn’t normally turn to Agatha Christie, the queen of Crime As A Crossword Puzzle. Her books are a satisfying easy read, but they’re not a serious reflection of reality. They usually finish with everyone gathering to hear all the gaps filled, the answers produced from a hat, and then everyone has a nice cup of tea. I know M. Poirot insists on the importance of La Psychologie, but I find that most of Christie’s characters don’t really have much psychology to work on. In the case of real crime, a nice cup of tea (or tisane) doesn’t solve anything. 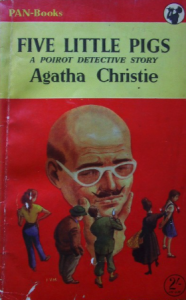 But I do always enjoy rereading Five Little Pigs. Maybe it’s because it deals with a crime that hasn’t been neatly tied up at a tea party. Poirot is called upon by Miss Carla Lemarchant to prove that her mother, Caroline Crale, was not guilty of the murder of her husband Amyas 16 years earlier, even though she was tried and convicted. For once, although there are plenty of clues from the day of the murder for Poirot to reinterpret, it is the psychology and history of Caroline, Amyas and the five little pig witnesses that really matters. Even better, though there had been a trial, which appeared to wrap the matter up conclusively, it provided no nice cup of tea, no comfortable closure for anyone. Even when Poirot finally gathers his audience to reveal the belated truth, we know it’s not the end. It’s a crime that has marked everyone, and that’s my sort of book.

Oh, and it has a quite bewitching setting, which always helps.