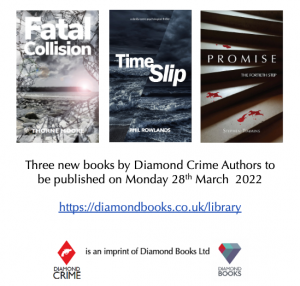 Artist Nicki Bryce is dealing with crippling grief and PTSD following the death of her husband Adam, killed by a drunk driver.

The wheels of justice are grinding slowly, prolonging the agony for Nicki and her daughter Willow. To add to their grief, they are being threatened by a stalker.

The offer of escape to a cottage on the Pembrokeshire coast seems too good to refuse.

But the harbour village of Tregelli turns out to be a battlefield of class and culture, not quite the escape they’d hoped for, as they become involved with neighbours nursing traumas and tragedies of their own.

Ian Chambers is in trouble and under pressure, guilt ridden and struggling to complete the first draft of his novel.

On a stormy night on a Yorkshire beach, he experiences something so terrifying that he questions his sanity.

In a desperate search for a rational explanation, he risks not only reality as he knows it… but his very existence.

Two more deaths: two of John Hannay’s closest advisers murdered. And now John knows that someone very close to him is one of the killers. Too close.

“The kidnapping, the bombing, the killings, they were all just sideshows. The game was me and I was a game because someone, ninety years ago, had been beaten by a Hannay and their game – their great game – had been ruined.”