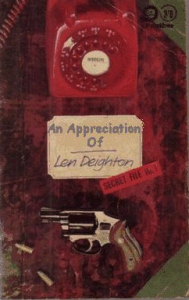 These days, people tend to associate Len Deighton’s spy novels with Michael Caine’s movies. They still watch them on obscure TV stations. They’re still good. And in 2022, ITV’s having yet another go at the first one – The Ipcress File. But however good it turns out to be, I doubt it will be anything like as good as the original books. The Ipcress File was first published in 1962. It jolted the James Bond fixated reading public into the realisation that spies didn’t have to be posh, officer class, cold, cruel and sadistic sex machines. It was Deighton’s first book and it was a best seller. I know, it’s sickening, but to be honest when a book’s that good, that mould breaking, that much fun, you really can’t be jealous. Just read the opening lines and you’re hooked.

“I don’t care what you say, 18,000 pounds (sterling) is a lot of money. The British Government had instructed me to pay it to the man at the corner table who was now using knife and fork to commit ritual murder on a cream pastry.” (The Ipcress File)

Clint Eastwood’s Spaghetti Western hero might have been the first movie cowboy with no name, but Deighton’s unnamed anti-hero got there two years earlier. And it’s no easy task to write a book in which the central character has no name. It helps, of course, that it’s written as a first person narrative. But it’s more than a trick. It is an essential plot device in this world class series of novels.

“It was one of those artificially hot days that they used to call ‘Indian summer’. It was no time to be paying a call to Bina Gardens in south-west London, if there was a time for it.” (Funeral in Berlin)

“It was the morning of my hundredth birthday. I shaved the final mirror-disc of old tired face under the merciless glare of the bathroom lighting. It was all very well telling oneself that Humphrey Bogart had that sort of face; but he also had a hairpiece, half a million dollars a year and a stand in for the rough bits.” (Billion Dollar Brain)

It takes another page for you to realise that it is the narrator’s birthday and he’s hungover from a party the night before.

Read them or re-read them. They’re the best.