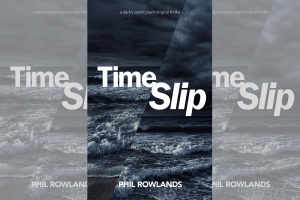 Abook you find yourself devouring in a single sitting is often recommendation enough but, in the case of Cardiff-based Phil Rowlands’ latest offering, reading it all in one go also lets you appreciate the tightening tension and change of tone more fully as the author ratchets things up a notch or three.

It also allows you see to see the way things darken and twist away from the first half’s light-hearted comedy, moving along at a lick into the territory of conventional crime fiction.

Knives flash in the dark. A policeman is stabbed. A Nazi spy might be involved. Time Slip is a dizzy mix of terse psychological thriller, engagingly funny portrait of a writer’s struggles and a brisk mapping of a relationship-triangle, with all of the latter’s attendant guilt, subterfuge and sexual deception.

Rowlands in this, his third psychological thriller after Siena and Single Cell, runs two stories confidently in tandem, interlacing them more tantalisingly and tellingly as the novel progresses.

The first and main thread is about Ian Chambers, a writer very under the cosh as he tries to finish a book before his titanium-plated agent takes him off her books. When we first see him on a wind-lashed Yorkshire beach the whipping storm outside matches his inner turbulence:

“It was a rough, miserable and grey day: the wind howling and the rain pelting. Ian Chambers, tall, rumpled, forty-nine, writer, wrapped in heavy coat and drop-eared cap against the drenching wet and bitter cold, battled the storm from the end of the deserted promenade to a small shelter overlooking North Beach. Maybe the sight and sound of nature’s raw power would clear the shit out of his head and make space for a genius solution to gestate.”

If that genius solution doesn’t materialize it’ll mean handing back his advance and the money’s long been spent, so that’s not really an option. He’s also facing a writer’s block that fair resembles a monolith.

And as if that wasn’t pressure enough, he has just ended an affair with a friend of many years and knows if the truth comes out then things will be over with his wife Norah.

But that isn’t all: the car is on its last legs, his writing students are doing better than he is and he always has those big authorial decision to make, such as choosing red or white wine at day’s end.

To compound his problems, he is drawn into the net of the book’s second narrative, that of a violent incident which happens during a ferocious, lightning-flashed storm at the time of the Second World War on that self-same beach in Yorkshire

Chambers gradually comes to realize that he is trapped in the Time Slip of the novel’s title and that what happened in the past has serious consequences for him now, even fatally so.

Negotiating all this is like walking through a field of tripwires, and there’s a lot of fun to be had early on, before the book darkens in tone as we spend more time in the past and its skullduggeries.

There’s a police raid on some black marketeers which goes fatally wrong, resulting in the death of a young constable. Then Chambers’ research into time slips suggest he might lose his own life as he melds and merges with a character from the past. He meets an oddball academic who helps him understand this weird phenomenon even as his life threatens to unbalance him just as surely as does skating at the ice-rink at his son’s birthday.

Here his former mistress, Lucy is turning up for the celebrations, bringing her youthful and lusty new lover Mark with her whilst threatening to burst all the party balloons.

It all makes for an incident-packed novel and if you’re a writer you’ll certainly feel for the book’s hero, as time turns into a sort of enemy and a deadline comes to resemble a cliff edge.

He almost doesn’t get his son’s cake in time. He gets hit in the stomach as if he’s a boxing sparring partner.  He has bad experiences with spiders and Chambers hates spiders. Woe follows woe follows mishap.

As a reader the experience of encountering Time Slip is all about the hours slipping pleasurably away, the roar of those crashing waves in the novel’s multiple storms replaced by the quiet shirr of pages turning.