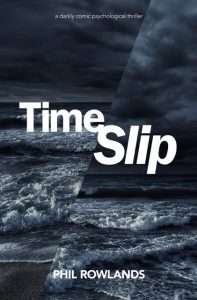 It was the worst night since the catastrophic storms over New Year.

Huge waves battered the shoreline, howling winds and icy rain whipped and twisted, and cracking thunder and jagged lightning echoed around the sides of the bay. It was not a night to brave the elements, but two policemen dressed in heavy capes and helmets, one shorter with a slight limp, were almost at the end of the deserted promenade, their bodies leaning into the ferocious gale, metal-toed-and-heeled boots clicking and sliding on the saturated surface.

They stopped at the top of the steep steps that led down to the beach, their heads coming together briefly, then the one with the limp moved carefully and slowly down onto the slippery wooden treads. He hesitated then, as the other turned and headed toward a hut that sat under an overhang leaning out from the high cliff behind it, shouted to him, his hands cupped around the sides of his mouth. It took a moment for the other to hear then he stopped, looked around, and, seeing the beckoning arm, went back. He listened, his ear close to the other’s mouth, then nodded and followed him down to the sand. They struggled against the wind and rain as the sea pounded the beach. In the distance ahead of them, at the far edge of the cove, the outline of a Lookout post was just visible.

Suddenly, the taller man caught a brief flickering beam of yellow light bouncing close to it. He shook the wet out of his eyes. Then the light flashed again and lit up shadows and stones in the wall. He grabbed the other’s arm, pointed towards the Lookout, and shouted “A light!” The two men stared, waiting for it to reappear, then, when it didn’t, they hurried towards the building. It was exhausting pushing through the buffeting and blasting of the storm and the one with the limp found it hard to keep up and almost fell as he tried to match the other’s speed.

When they got there, they paused for breath, then moved around, careful to keep below the long, narrow observation slit, until they reached a wooden door where the rock face behind gave some shelter. The one who’d stumbled reached inside his cape, took out a truncheon and held it at head height. He grasped the metal door handle, slippery in the wet, and with difficulty turned it and slowly pushed the door open. The other pulled out a torch and turned it on. The beam was dim, the batteries almost out, or damp. He shook his head and they stood there, listening for any sounds that weren’t their own.

The light from the torch died suddenly and the darkness was absolute then a sudden zigzag explosion of lightning directly above them reflected on the long blade of a knife as it slammed through cape, uniform, and deep into flesh.

It was a rough, miserable, and grey day: the wind howling and the rain pelting. Ian Chambers, tall, rumpled, forty-nine, writer, wrapped in heavy coat and drop-eared cap against the drenching wet and bitter cold, battled the storm from the end of the deserted promenade to a small shelter overlooking North Beach. Maybe the sight and sound of nature’s raw power would clear the shit out of his head and make space for a genius solution to gestate and grow. A solution that would give him an ending for his latest novel, an ending that made sense and would leave the reader, if not totally fulfilled, at least satisfied.

His mobile vibrated and rang. He turned his back to the sea and checked the caller id.